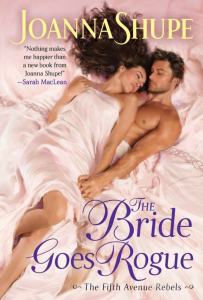 The Bride Goes Rogue is the third book in Joanna Shupe’s Fifth Avenue Rebels series. Set in New York, it follows Katherine Delafield, the dreamy and sheltered heroine, and Preston Clarke, the savvy but heartless businessman whose father brokered a betrothal between the two. As a huge fan of Joanna Shupe, I was too excited to receive an ARC copy for review purposes.

After a bit of a slow start, I started to realize how much I enjoyed this book. It was just so fun – the glam of the New York lifestyle, the tension between the characters, the sexual energy, the classic enemies-to-lovers. And as always, Shupe throws in lots of wonderful scenery, from a masked party to a high-end New York restaurant.

I’ll be honest: I struggled to get into this book. It all seemed a bit silly in the first few scenes. Katherine goes to visit Preston, her supposed finance of a year, because her father tells her to. Katherine has been pining over Preston, eagerly awaiting their marriage (after being engaged for twelve months), following his every move in the papers like a middle-school girl. Her father has been indulging this and expecting them to marry, but when Katherine complains that it’s taking too long, he sends her to visit Preston herself, which was wildly out of place for the time. Preston quickly shuts her down and informs her that he never thought the betrothal was real or valid.

We’re told that Katherine and Preston met a year ago, but according to Preston, he never intended to marry her and is shocked that she thinks they’re engaged. Did he not make this clear during their previous meeting? And if he DID play along with the engagement, then why is he surprised? Clearly, one of them made a huge blunder, but this is not addressed. I felt that this miscommunication could have clearly been avoided with either of the characters thinking outside their tiny box. It just didn’t seem like enough – maybe it would have helped if her father was the one to facilitate the miscommunication, or their lawyers, or someone else.

When Preston states that he absolutely will never marry her (and she immediately asks if it’s because of her looks – yikes), her father seems unsurprised and says they must jump on her season immediately before she’s an old maid. If her father spent the last year thinking they were engaged, why is he not more upset? I’d have thought he’d run off to see Preston and possibly come to blows. We later learn that there’s some bad blood between Katherine’s father and Preston, but none of this was evident in the first scene, making the setup a bit confusing.

I wish that Katherine had been awaiting their marriage from a more practical point of view. I also wouldn’t have minded if she wanted to get married simply to start her own life and was looking forward to being mistress of her own home. This would make more sense to me than a silly schoolgirl crush, which set the rest of her actions up to be a bit ridiculous – she clearly starts acting out due to hurt feelings. For me, the beginning of the book creates an unlikable heroine and I struggled to get past this.

From there, Katherine decides that she will “go rogue” and have an affair. While I liked her sense of independence, she was clearly out of her element and yet was unafraid. As a sheltered young lady who was pining over her future husband after only meeting him once, this change of character seemed too abrupt. I wanted to see her struggle to let loose; sure, it’s a cliche in the historical romance genre, but that’s because it makes sense. No sheltered young woman will suddenly do a 180 and act the part of a seasoned mistress convincingly enough to fool a worldly man.

After the beginning, the book picked up for me. There’s a good deal of sexual tension and the whole drama of the characters wearing masks the first time they’re physical with each other was just perfect. Then there’s the reveal and the subsequent fallout – Preston is angry, thinking she’s trying to trap him, and that her father is in on the scheme. Her response made me warm up to Katherine – she’s annoyed instead of weepy and stands her ground. Meanwhile, Preston is fighting his attraction to her due to his hatred for her father. The tension jumps off the page! In fact, this is really the first time that I started to love the chemistry between the characters.

Katherine continues to avoid Preston and in doing so she becomes a likable character. We start to truly see her backbone. Preston is forced to chase her under the guise of caring about her father’s actions, a very good play.  The pacing of the book is very good. The reader is led from scene to scene with ease and nothing drags on. In fact, there’s plenty of plot, scenery, and liveness to go around. One things picked up between the characters, I was hooked.

Other than some larger plot issues, it’s a fun little read, if you can get past the out-of-place elements. There are SO many actions and bits of dialogue that just don’t make sense for the era, even in New York City. In many ways, it reads more like a contemporary. The characters are just too bold and follow the cultural standards of the 21st century rather than centuries past. I love how Joanna Shupe writes stories that are more than the typical regency, but I do wish that this book didn’t have so many out-of-place elements, especially how Katherine suddenly turns into a modern-day woman despite living a very sheltered life.

The steam is very good. I can always count on Shupe for some toe-curling scenes and once again, she delivers. Not only are the *places* the characters get intimate fantastic, but the dirty talk is great. The chemistry is also very good between the characters – you can really feel the heat start to build, making the actual consummation scenes that much better.

Overall, I’m giving this book a 4/5. It’s a classic happy read that will put you in a good mood as long as you can overlook some of the smaller details that stand out. And if you’re looking for a book with tension and steam, you’ll definitely want to give The Bride Goes Rogue a read.

Built to Last is an adorable second chance romance about friends-to-lovers. This book has a great

Kissing Games by Stefanie London is such an entertaining and cute read! If you’re looking for