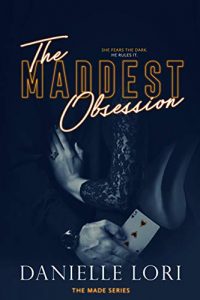 Being totally honest, when I first read The Maddest Obsession I didn’t love it as much as the first book in the Made Men series. I was so hung up on Elena and Nico and the…prettier? aspects of mafia life. Book 2, The Maddest Obsession, touches on some darker stuff. Yet every time I re-read it, I love it more and more, and now I’m pretty convinced this is my favorite installment in the series.

My GOD the love between these two.  It’s so strong it physically hurts me in the best way.

Gianna, the heroine, is not someone I wanted to read about when she appeared in the first installment. She came off as kind of petty, like a vapid sugar baby who also has some drug/alcohol issues. And props to Danielle Lori for managing to reveal why she’s like that and make her one of my favorite heroines of all time. By the end of the novel, I could see just how feisty, witty, and yet soft-hearted Gianna is. She’s SUPER strong which I always love in a heroine and is definitely not a damsel in distress. But she’s also really caring, despite her wildly traumatizing past. I wish I could be friends with her.

And don’t even get me started on Christian. He’s cold and brutal but somehow so, so soft around Gianna. Lori really shows you how he’s just a little boy inside with no one to love him.

This book has incredibly witty banter, pining (duh I’m a sucker), opposites attract, adventurous sexy scenes, and a relationship that actually progresses (we get to see the characters grow into a relationship, into a daily routine, instead of just a speedy happily-ever-after).

“How about because I love you, Gianna? Because I think I have since the moment I saw you? Because if you weren’t in this world anymore, I would find a way to take myself out of it?”

My God. The EMOTIONS. If you want to read about two emotionally closed-up people who ACTUALLY change and reveal their softest sides to each other then this is your book.