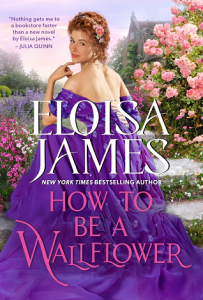 This novel follows Cleopatra Lewis, a young woman about to be introduced into society by her aristocratic grandfather. But since she doesn’t plan to get married (and is completely against the idea for business reasons specifically), she visits a costume emporium specifically to order unflattering dresses that will dissuade potential suitors.

Jacob Astor Addison is also in London (though he’s American in just about every way) acquiring companies to add to his theatrical holdings back home in America. He is furious when he sees Cleo, someone he at first assumes is a drab English lady, stealing his costume emporium right from under his nose.

Jake tries to get the company back by bargaining with the owner as well as Cleo, to no avail. He then decides to get closer to her (though he is scrupulously honest about his plans) and strikes a bargain: he will design her wardrobe, fit for a wallflower, and Celo will design his. Along the way, the two become companions, and just a few scenes later Jake realizes he wants her more than he wants the company.

My favorite part of this novel was that it was unlike the historical British romance in every way. The characters were different and quirky, especially compared to the typical regency romance, but James clearly shows how they fit into society (not always well), making it very realistic. Cleo is especially lovely – she is certainly one of my favorite regency heroines I’ve read in quite a while!

There were a few issues towards the end for me personally. Firstly, Jake falls in love far too fast for a businessman. One moment, he’s focused on doing whatever it takes to make his theaters successful, and the next moment he is ready to sell off his theaters (apparently he never liked them anyway?) and move to London to win Cleo. Secondly, the plot itself had some holes. Why do they decide to design each other’s wardrobes if they’re truly intent on winning? Why does Cleo basically give up on being a wallflower? Why does Cleo go from being a self-sufficient businesswoman to a shy, insecure girl overnight? I really loved the beginning (the voices of the characters are just truly amazing) but wished the characters had stayed true to form throughout the novel and that the plot had been less confusing.

Cleo’s trauma with her mother was so well-done. I especially loved her strong feelings of loyalty towards her mother warring with the personal issues created by her mother’s lifestyle. Truly a marvelous bit of writing.

Overall, I would reread this just for Cleo’s character alone. Her voice is so unique yet I found myself in her thoughts over and over. I especially liked her strong take on her grandfather and his friend!

I voluntarily read and review an advanced copy of this eARC thanks to Avon and Harper Voyager via NetGalley. All opinions are my own.