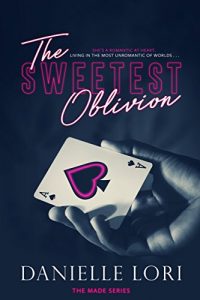 I’m someone who doesn’t often indulge in mafia romance novels. I find that the mafia genre either a) features a WILDLY aggressive man who isn’t grey but is straight-up abusive or b) features characters that are only two-dimensional, who fall flat in the face of their “mafia” personas. But someone, Danielle Lori has managed to create a truly grey, three-dimensional MMC who just jumps off the page. And even better, he’s coupled with a FMC who has a real, tangible personality – someone I’d want to be friends with.

I’ll go ahead and say it: The Sweetest Oblivion isn’t just my favorite mafia book right now but my favorite romance book of the year in general.

Everything I liked about The Sweetest Oblivion:

And there’s literally nothing I disliked about this book. I’m a pretty picky reader and I usually have a few cons with even my favorite authors. But since I can’t think of a single one, if you’re at ALL interested in the mafia genre then I highly recommend The Sweetest Oblivion. Plus, it’s on Kindle Unlimited!