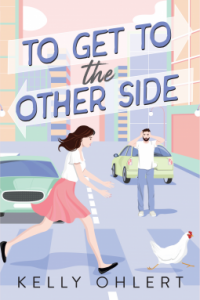 For me, this book just didn’t do it. The premise sounds interesting: Trixie grabs a chicken out of the road (presumably to save its life) and then can no longer live in her pet-free apartment, so she moves in with Bear after his sister posts an ad renting out his spare room.

There’s just not enough in this story. It feels more like an idea for a story than a finished copy. The characters are bland and one-dimensional and many of their actions don’t make sense.

The premise just felt…weird. Like OK, Trixie saves the chicken from traffic. As someone who has saved many a turtle, I get that. But then why didn’t she find the chicken a nice home at a local farm? Why did she spend thousands of dollars saving this chicken at a vet even though it means she went into debt? How does this girl actually get through life making these sorts of decisions? Trixie is the classic *not like other girls* manic pixie dream and it just didn’t work for me. She didn’t feel real or relatable. We don’t even really see her bonding with the chicken – it’s just assumed that she must save the chicken because that’s the kind of person she is.

Meanwhile, Bear is the classic *grumpy* hero who doesn’t like to be around people. He gets pretty obsessed with Trixie right away (which was confusing, because you’d think someone like her would be very annoying to a grumpy hero) and can’t stop looking at her butt for the rest of the book. He also has a bunch of trauma from his dad telling him to “be a man,” and I get it: those are real issues. However, the way they were portrayed was strange. For example, he drinks beer when he wants to drink wine because he needs to be a man? Plenty of guys I know drink wine and no one makes fun of them for it.

The writing itself has a lot of telling, not showing, which took me out of the story over and over. It felt a bit like a child’s book rather than a young adult romance novel. Even some of Trixie’s dialogue reads more like a child.

I do appreciate what the author tried to do by showing the characters grow and change from each other’s influence, but they were flat from the beginning so it just didn’t work for me. I needed to know…more about the characters, to actually feel them jump off the page, in order to care about their growth.

Thank you Netgalley for providing me with a copy of this book in exchange for an honest review.

This book will be available on December 6th, 2022.

Built to Last is an adorable second chance romance about friends-to-lovers. This book has a great

Kissing Games by Stefanie London is such an entertaining and cute read! If you’re looking for