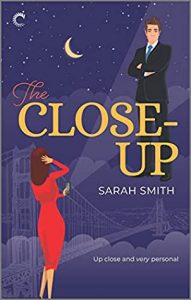 The Close-Up was my first Sarah Smith book but definitely not my last!

Naomi is a digital editor for a site called Dash who is on a “relationship ban” after a string of bad relationships. Simon is the “perfect guy” who, as a relationship therapist, is Naomi’s current interview assignment. Sparks fly, but they work together so any relationship is off-limits.

I really enjoyed the start of this book. The characters jump off the page and the chemistry between them captivated me from the beginning. There are also some super legit plot twists (such as Simon’s work as a former cam guy and the distressing way Naomi finds out her boyfriend is cheating on her) that make this book feel very unique. It’s definitely not a cookie-cutter read.

There’s a little bit of everything here: fluff, jealousy, pining, and steam. It’s definitely on the happier side and is perfect for anyone who likes the workplace romance with the whole can’t be together because they work together vibe, which I’m a huge fan of. The premise is totally believable – it makes sense why they’re always around each other but can’t actually hook up.

Plus, the main characters’ jobs are really interesting. I loved watching them work together and hearing Simon talk about relationships before they’re actually in a relationship.

Towards the middle/end, this book slowed down for me a bit. Simon seems just…too perfect? He has literally no flaws so there wasn’t much growth on his end. Even during the sexy scenes, it felt more like Simon was just doing what he normally does – being good in bed. I had no sense that this was different for him, even though he falls for Naomi very quickly. His character was a bit too static for me.

Meanwhile, I felt like Naomi came off as a bit immature at times. She jumps from feeling to feeling too quickly and does things that just don’t make sense. For example, she’s in the middle of kissing Simon and gets a call from her best friend/cousin. Instead of texting her best friend to say she’ll call her later (or quickly answering to say the same thing), she jumps on the phone and talks to her friend the entire Uber ride back, so she never gets a chance to decide where things stand with Simon. To me, that’s just rude. There were many of these examples and Simon just accepted her actions (because he’s the perfect man) so we were supposed to believe that she had a good reason for her actions.

My last *wish* is that the author had included less obvious dialogue. Often, it feels as though the characters are stating exactly what they think point blank, which from my experience people in real life don’t do. I’d rather have a little mystery instead of being told what the characters are feeling.

The happy ending was really sweet. Plus, I loved all the little *jealousy* moments along the way. The author does a great job of keeping the tension up. There are a few time jumps that I wish hadn’t happened (I want to see more of their relationship along the way), but the romance is very clearly developed and it’s obvious by the end that the characters belong together.

Thank you Netgalley for providing me with a copy of this book in exchange for an honest review.