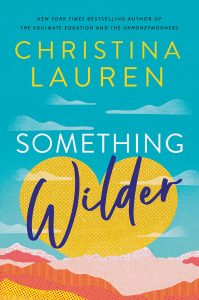 I literally can’t say enough good things about this latest installment by Christina Lauren. It has a treasure hunt with amazing clues, a Westworld vibe, and the most heartwrenching yet also sweet romance I’ve ever read.

Lily Wilder is really down on her luck in the beginning. Her infamous treasure hunter father (who she was never close with) has died after he sold her beloved ranch, leaving her with virtually no money. She’s forced to lead tours through the “wild west” for rich folks who want a “grand adventure.” She’s also still heartbroken over losing the love of her life, Leo Grady, ten years ago.

Meanwhile, Leo is living his (best?) life in New York, working as a tech guy and trying to forget about Lily. It’s been ten years, but these two haven’t forgotten. And somehow, the Christina Lauren author duo makes this feel very realistic. Their chemistry and their heartbreak jump off the page.

Now, they’re forced to be around each other when Leo’s friends book a one-week trip with Lily’s group. Neither of them realized that they were going on this trip together, and the “reunion,” when they first realize that the other is there, is incredibly awkward and delicious.

After the trip kicks off, the book gets really adventurous. I won’t spoil anything, but basically, they end up on a serious treasure hunt after a series of mishaps complete with looming cliffs, horses, guns, and tons of really intense codes that they need to crack under pressure. Plus, there’s the only-one-bed trope (and it’s incredibly well done) and a whole bunch of times where they’re in actual danger, forcing Lily and Leo to come to terms with their feelings.

While I’m not necessarily someone who will seek out a book about the wild west, this one really caught my interest. I wish I could go on a legit treasure hunt now! The plot is literally incredible – there are constant twists and turns that you just don’t see coming.

But the two main characters really cinched the deal for me. They communicate really well about their hurt (despite being separated for ten years over a misunderstanding), both have angst from their past but are able to share it with each other, and don’t pine unnecessarily. At the same time, there’s plenty of tension to keep the reader engaged. And the steamy scenes were incredibly hot and angsty.

I’m a huge fan of Christina Lauren’s earlier books (especially the smutty ones), but I have to say that this may be my favorite Christina Lauren installment yet. The plot combined with the characterization just really did it for me. 5/5 stars!

I received this as an ARC from NetGalley, but these opinions are all my own.
Share this